On this episode of Ungagged, themed around "the luxury gap", we hear Neil Anderson  and Sandra Webster,  interviewing Mhairi Black MP which she and recorded at Mhairi’s Paisley constituency office. Mhairi gives us insights to the House of Commons and some of its characters, why she entered politics, along with her views on Donald Trump and Jacob Rees Mogg.

We'll also have a listen in on a chat with Neil Scott  and Scottish Independence campaigner and artist,"Wee Skribbles" (Michael Larkin), who talks about his work and how he became an activist for independence.

We'll hear from Debra Torrance  on  Food Luxury, specifically about food production in the Netherlands, the second largest food producer in the world, Victoria Pearson ponders the psychological damage of poverty on children and why short breaks should be on the NHS, George Collins will be examining the conundrum of combating global economic injustice from an environmentalist standpoint, and the necessity of interdisciplinary thought among progressives, and Chuck Hamilton muses about the American white middle class and their view of the rest of humanity.

Nelly Neal asks whether the evils of want and ignorance seen by Dickens and quoted in the 1942 Beverage report are still here now and if they’ve ever gone away, Laura Lundahl tells us we are ALL immigrants, and says we can help immigrants by changing the way we talk about them, and the possibilities of food shortages after Brexit is discussed by Red Raiph, who has been practising his bartering skills so he can trade for food.

Sandra Webster was transported back in time by the title The Luxury Gap and reminisces about Heaven 17 and The Clockwork Orange before discussing poverty and having enough food to eat.

With music to get you moving from Steve McAuliffe & the Mighty Ur, Madame So, Gallows Circus, Jackal Trades, Attila the Stockbroker, The Blackheart Orchestra,  Ethical Debating Society, Argonaut, Nervous Twitch, The Potentials, and Sharon Martin. 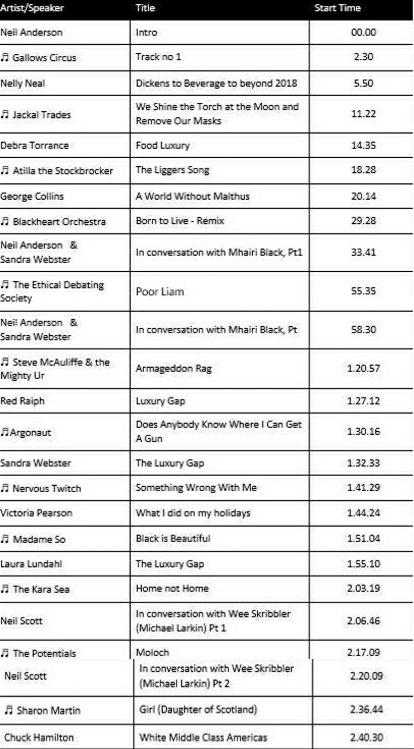 Donate the price of a cup of coffee to keep us Ungagged!  Here

Ungagged in the past...