It's Ungagged's birthday, and we are so excited to have been going strong for a whole year. We couldn't do it without the support of our listeners - your downloads, conversation generated from your tweets, facebook comments and comments here, as well as your wonderfully generous donations make Ungagged what it is. It is as much yours as is it ours.

We’ll also hear from Richie Venton on the 10th anniversary of the onset of the economic crash, George Collins will join us for a chat,  Paul Sheridan talking about people not having confidence in their own abilities and on singing one of his own songs, Derek Stewart Macpherson reading us his letter from Australia, and brand new Ungagger Ola from Ola’s Kool Kitchen will be joining us. We'll also have an Independence Live interview with SNP MEP Alyn Smith.
With music from The Wakes, Hands of Blue, COAST, Velodrome, Dactylion, Baby Seals, Thee Faction, Joe Solo, Jackal Trades, Roy Møller, Thunder on the Left, Stuart McFarlane, and Ms Mohammed. 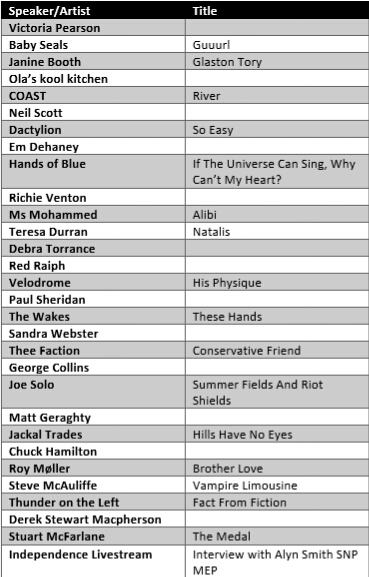 Ungagged is a not for profit co-operative, and we rely on the generosity of our listeners. If you’d like to donate us the cost of a newspaper or a cup of coffee, you can do so through PayPal here.